Founder’s Diary Episode 6 – Qlue Highlight: From Jakarta Smart City to the Next Level

SIAR.Com, Jakarta — You are reading a part of Founder’s Diary Sixth Episode Documentation. In this documentation, we are highlighting Qlue, one of our speakers in this episode especially regarding how Qlue has evolved along the way from serving Jakarta Smart City to have an end-to-end smart city solution not only for government but also for enterprises.

In case you missed it, in our sixth episode, we were joined by RaMa Raditya, the Founder and CEO of Qlue. Rama Raditya (Rama) is the Founder and CEO of Qlue. He was inspired to establish Qlue as there was no effective platform for citizens to report social and environmental problems directly to the government. He started Qlue to be a communication platform between the government and its citizens, and encouraged the governments to be more communicative, transparent, and inclusive to respond to the citizens’ complaints or feedback.

Qlue itself is now a comprehensive smart city provider in Indonesia. With a broader mission than when it first started, Qlue now aims to accelerate positive changes worldwide and has developed various cutting-edge solutions based on AI, IoT, and mobile workforce technology to help both government and private companies to be more effective and efficient in running their business and operations.

How does Qlue evolve overtime, starting from Jakarta Smart City to what you are today, what is the thought process?

Yeah, we actually had no idea back then that we will do this vertical of products like what we have today. We started with a citizen app. But we knew that the fundamental is to identify the social issue like patrol, garbage, traffic, illegal parking and something like those which we have to respond to, make policies based on what happened in the field (data). That was the simple mechanism, the flow that we think about from day one.

In the very beginning, we have massive download from the citizens. Thousands of downloads per day. But then soon we realize that government bodies always changes.  The use of the app of Qlue perhaps has no changes at all but when the “person in charge” changes, a lot of people start to have disbelief in the app.

Though the system has been fully built, we see a significant decrease in terms of number of new downloads. We started to think of what we should to in the future if people stop using the app. Then the idea of leveraging CCTVs came in which the government can leverage on CCTV as an automatic sensor to provide reports. With the AI vision, the so called reporters, we will have more comprehensive data.

However, things are not stopping there. Another thing happened, we realized that although the reporting can be done in real time now, the field officers still take some time to handle the situation that is being reported by the technology.  That was when we started to explore IoTs. We explored smart speaker that automatically shouts to prevent unwanted things to happen such as illegal parking, or to create a more dynamic traffic lights.

We thought that these processes always keep us being on top of the situation and being innovative. Capturing information has to happen in real time and responding to it has to become faster and faster. So I think, in general, we still hold the same vision since day one but as technology grows alongside with the growing situation, we always try to keep being innovative.

In summary, I think there are two main catalysts for our so called pivot, one is the understanding that relying on citizens’ report may not be scalable in the future. Secondly, we learned that government bodies are constantly changing as well. Therefore, we tried to minimize all these uncertain factors by leveraging on technology and expanding to enterprise segment.

Is there any specific guidance or principle to implement facial recognition in public sector that are safe in terms of citizens’ privacy?

We always see the purpose of each project that is offered to us. Most of our facial recognition projects are in the purpose of safety and security, for the government and enterprises. Each of our clients has their own data center as well to maintain the level of security. So it is definitely not in a public cloud somewhere.

I know that after what happened in the US the other day where there was a misinterpretation of facial recognition result. So I think, for us, we always try to evaluate the purpose first. If that is for safety and security issue, we can do that. We can do payment verification purpose as well.

The other most important thing is what you do with the data and where you store it. If it is on premise then it is safer. I think if we are talking about regulation, I don’t see if it is written yet in our regulation, in terms of policy. But we are working closely with the government to make sure that our technology is going to where the government want to make use of it.

For instance, in China, facial recognition is embraced while in the US, it is banned in public places. We want to know where Indonesia wants to take this in the future. Especially for Indonesia as this can be considered as something new that has just started to be developed. But I can say that, we value purpose so much. If we think that purpose is not ethical or wrong, we won’t do it.

By working with them, you build your credentials. You can always partner up with smart city providers as well. We are open to collaborate. We build a platform where we can partner up and integrate with a lot of IoT providers with AI capabilities. So if you have a unique solution that you think can be integrated with our solution, we are open for collaboration. We can definitely promote that into the 50 cities that we have already worked with.

I don’t recommend going directly in the early days. I remember I wrote 10 emails to the government and had to wait for 8 months just to get accepted to meet the Vice Governor. It took so long definitely. So if you are thinking about a faster way and mindful with your runways, I would suggest taking the shortcuts. Synergy is very important, work with others especially if you have a strong unique proposition because otherwise they will build it themselves easily.

Any advice for fellow startup founders?

This may sounds cliché but do something that you really love and passionate about. That will help you to create the why on why building that startup. Don’t think about the coolness in building a startup, because if you don’t love and have passion in that industry, when the challenges come, it will be easier to give up.

So start to ask yourself what you really love and passionate about. For me, I always want to contribute to our city and the whole nation to solve the social issues. That what brought me to build Qlue in the beginning. So when I face challenges or problems as we face it every day, I take it as playing a video game where you have to keep levelling up.

There is this one quote from Mark Twain that I always look up into “The two most important days in your life are the day you are born and the day you find out why”. So, find out your why and then build your startup to make it happen. I think that’s from me. (Natashia) 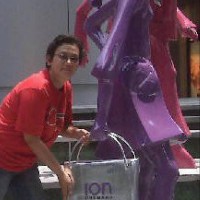 Founder’s Diary Episode 6 – Qlue Highlight: From Jakarta Smart City to the Next Level